Even fences can connect

Pletiva Dobrý a Urbánek was founded in 2013 based on an equal share of both company co-owners. Thanks to clearly defined roles in the company, a stable team of experienced employees, and cooperation with the National Development Bank it has expanded every year ever since. “We own two locations with large stock. To buy these premises we used the NDB’s product. I dare say that it was one of the key moments in the company history,” Tomáš Urbánek describes. Gradually, their original company was joined by other projects, and this year everything culminates in the transformation of their business into a holding company.

HOW TO GROW AT THE BEGINNING

If you want to run a successful business, you first have to know something really well, to understand your field of expertise. Messrs. Urbánek and Dobrý make a great example of this fact: one understands online marketing and business management, and the other is an expert in technical solutions provided to customers. The clear role definition of the general and technical manager and the synergy of the individual skills of the co-owners propelled the company among the top mesh and fences providers in the Czech Republic within ten years.

Particularly when starting a business, sometimes it is really difficult to guarantee your operational financing because the company does not have its own assets to pledge. The experience of Tomáš Urbánek tells him the same, “I dare say that we would have never grown this big if the NDB had not provided us with a guarantee. The fact that we have huge stocks today is also thanks to that guarantee. At first sight, the application form looks administratively demanding, but the bank advisers do a great job and are extremely helpful in filling out all necessary documents.”

Given the current turbulent times, stocking up on a sufficient quantity of products is crucial not only to starting businesses. In many market segments, it is not uncommon that scheduled deliveries are delayed by months, some items even longer than a year. “I can´t imagine, if we had not had the stocks financed by operating loans, what we would be selling to our customers today,” confirms the CEO.

HOW TO MOVE FROM STABILITY TO EXPANSION

During its existence, the company has built four branches: three in the Czech Republic and one in Slovakia. Two of them, Ledce near Plzeň in West Bohemia and Zliv near České Budějovice in South Bohemia, are located on their own premises. The headquarters in Ledce is located on a site with an area of more than 40,000 m2, where there are large stocks of all products offered. Stock availability is the company´s greatest advantage, as it guarantees stable deliveries to customers even when there are several months of iron supply shortages on the market.

Tomáš Urbánek considers the purchase of these two premises, in which they used the NDB Expanze loan product, to be one of the most important moments in the company’s history: “Since 2018, when we bought the premises in Ledce, we have grown from a turnover of CZK 117.5 million to CZK 238.8 million in three years. It is a feeling shared across the entire team that we are in our “own”, and can therefore provide our customers with maximum care. With this purchase, we have achieved real stability and gained solid ground under our feet, which has started a huge expansion.”

HOW TO SYNERGIZE YOUR ACTIVITIES

In addition to the company Pletiva Dobrý a Urbánek s.r.o., the two business partners are now co-owners of two other profitable companies and a non-profit project Farmapark u Toma. All projects complement and reinforce each other.

Zahrada Ježek has been in operation since the end of 2017. The minority owner is Jan Ježek, formerly the financial director of the company Pletiva Dobrý a Urbánek. The majority owners founded the company with the intention of using their experience in e-commerce, which turned out to be a good strategy. Last year, they reached a turnover of CZK 70 million excluding VAT and served more than 15,000 customers.

Krmiva u Toma was founded during the covid pandemic. At the headquarters in Ledce, there were vacant warehouse space and an office building, so the decision was made to create a new project, with the aim of further stabilization. They opened the company in the autumn of 2020, achieved a turnover of CZK 37 million excluding VAT and served 50,846 customers last year. As Tomáš Urbánek says: “Breeding supplies is a very demanding segment, but this sector won because of its absolute independence from any crisis, which fitted perfectly into our strategic plan. Once again, we have proven that being in your own space has an incredibly positive effect on expansion. Krmiva currently has three operating stores: two in Plzeň and one at the headquarters in Ledce.” 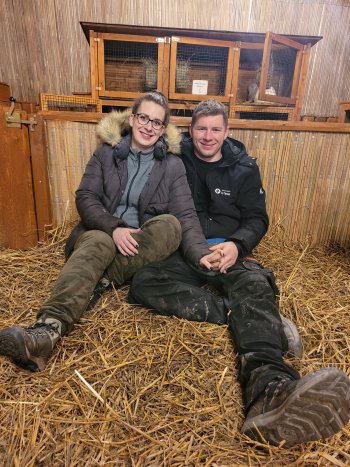 And it was Krmiva u Toma that was the driver in setting up the non-profit association Farmapark u Toma. The company premises in Ledce also include a 20,000 m2 plot of land, which was degraded by the industrial production of kaolin in the 1950s. “We have gradually cleared the land,” explains Tomáš Urbánek, “and today we have used about 1/3 of the area just for the Farmapark. In the next two years, we want to expand the park to the entire area. Since the opening, the number of visitors has been in the thousands. The Farmapark project makes us very happy and at the same time it attracts many people to our local fence and breeding supplies store.”

Tomáš Urbánek, co-owner and CEO of the company

Before the company was set up, he did business in online marketing. In 2012, it led him to cooperate with František Dobrý in building an e-shop with fences. In 2013, they founded Pletiva Dobrý a Urbánek s.r.o. with equal shares.

HOW TO GROW FURTHER

The CEO is not worried about problems related to lack of materials or employees. Supply shortfalls do not threaten the company thanks to the large warehouse stocks discussed above, and they do not feel a shortage of workers thanks to their human-oriented corporate culture. “Yes, human resources have been depleted, that is true. Managers of some companies look at employees as human resources, as an item in their charts that brings the company some financial value at a given cost. Unlike them, we don’t approach people as human resources, but as friends. Everyone in the team knows that they can rely on the company and at the same time they are very well trained in what we can do and what we can offer to the customer to help them solve their problem. We do not sell materials to our customers, but we help them solve their problems.”

This year, the company is undergoing a transformation to a holding structure. The parent company PDU holding s.r.o. was founded last year, and this year the companies will be transformed into subsidiaries. “In business, I have seen several times that a well-organized group achieves much better results than an individual – no matter how efficient they are, an individual can never compete with a group,” adds Tomáš Urbánek.

How to build a fence

Pletiva Dobrý a Urbánek regularly organize fence construction demonstrations. This is how the idea is described by its author, Tomáš Urbánek, who personally conducts the demonstrations as CEO.

“In order to sell something to someone, first you need to get them to your store. In e-commerce, it’s given - everyone monitors website traffic, how many people they can sell to, etc. For years, I’ve been puzzling over how to capture this statistic in Pletiva. How to invite people to a fence mesh store? What can we offer the public to come to us? This is how I came to the regular demonstrations of fence construction. 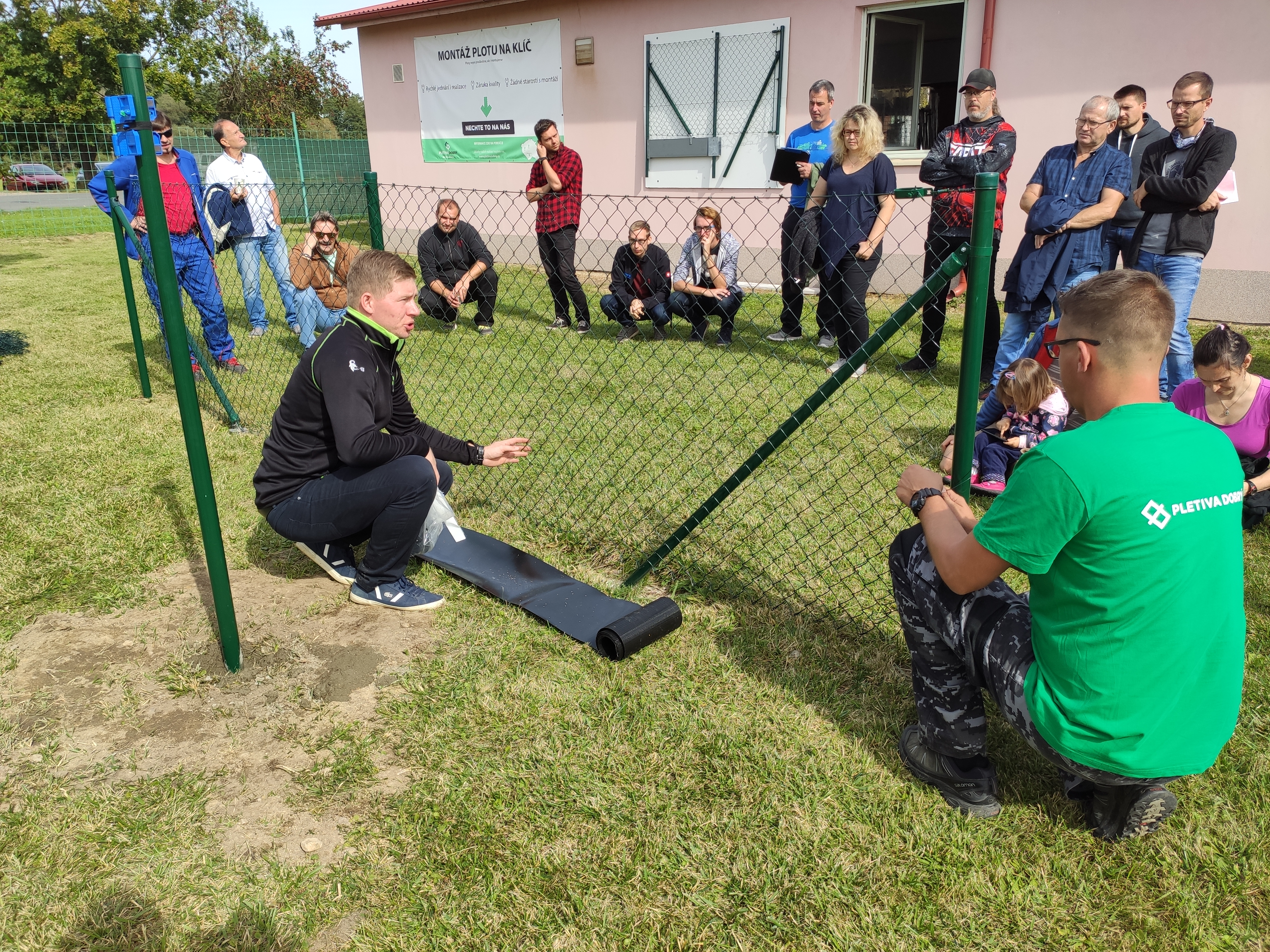 At all our branches, we try to carry out the demonstration twice a year and we manage to exceed the number of 100 participants at each event. I really enjoy giving lectures. Among other things, I have founded a business club Fenomén, where I pass on my experience. So, I try to come and personally moderate each show. I take off my shirt, put on work clothes and my colleagues and I show how to build such a fence.

In about 3-4 hours, we would show the participants the complete construction of the fence and answer hundreds of individual questions. We now know that this is one of the reasons why customers choose us as their fencing supplier,” says Tomáš Urbánek.

The company was founded in 2013, is headquartered in Ledce near Plzeň, and specializes in sales and turnkey installation of fences. It is a leading supplier of wire mesh and fences in the Czech Republic and Slovakia. It has 29 employees, and in 2021 it served 37,568 customers and carried out 759 turnkey installations. Its turnover in the CR and Slovakia reached a record high in the history of the company, more than 238 million CZK excluding VAT. Tomáš Urbánek and František Dobrý have been company owners since the beginning. Today, they jointly own three profitable companies: Pletiva Dobrý a Urbánek s.r.o., Krmiva u Toma s.r.o., and Dům a zahrada Ježek s.r.o. that are all undergoing a transformation into a holding company structure. The portfolio is complemented by a non-profit project Farmapark u Toma z.s.

The Expanze program of the National Development Bank eases the path to further development for SMEs through preferential loans and guarantees. The loans are provided with zero interest and without any fees, up to 45% of the eligible project costs. Another minimum of 20% of eligible expenses must be financed by a loan from a cooperating commercial bank or leasing company, for this loan the NDB provides a financial contribution for the payment of interest, up to 4 million crowns. Loans from the Expanze program can be used to finance investment projects, such as the acquisition of machinery, equipment, technology, software, licences, and real estate intended for business (i.e. warehouses, office buildings, shops, etc.) and their reconstruction.

The guarantee from the Expanze program can be used not only for investment projects but also to finance operating costs. This makes it easier for companies to obtain a loan from a regular bank, particularly if they do not have enough of their own assets to guarantee it. At the same time, a guarantee from the NDB often represents the safest and most attractive form of collateral for banks. Guarantees from the Expanze program are provided free of charge and up to 80% of the loan principal, which can range from 1 to 60 million crowns.